We’re somewhere in the Ouirgane National Park, in the Atlas Mountains of Western Morocco. The room smells slightly musty, despite the lack of humidity here.

My legs are tired, after a long day’s hiking and I’m slightly dehydrated. So I’m looking forward to the sugar-laden mint green tea that Mohammed is preparing. Before we can drink it, he has to go through the ceremony: standing up, singing a song, then pouring the tea from such a height that I swear he’s going to miss those tiny shot glasses.

But over eighty years’ old, he’s well-practised at this. The tea lands perfectly in each glass. Mohammed then notices my plate of half-finished tagine and couscous in front of me.

I eat a little more.

I give him a thumbs up.

“Sous sous,” he says, pushing me the tea. Drink, drink.

There’s eight of us here from England, all trekkers except my sister and myself. That, and another six or so Berber guides who have been our hosts for this trip. My sister and I are approaching the end of our Naturally Morocco tailored tour, and our stay in the Atlas Mountains has perhaps been the best of it.

Over the years, I’ve encountered travellers who’ve been turned off by Morocco. In Sarajevo, I met a young lady who took the ferry from Spain to Tangiers. Straight after arriving in Morocco, she turned around and took the boat back again. Her reason: too much heckling. I read a similar account about a traveller who visited Fez recently.

But my experiences of Western Morocco were anything but. Although it’s over ten years since I visited now, my sister and I had an enriching cultural experience there that helped shape me as a meaningful traveller in my adventures to come. From the quintessential Roman town of Essaouira to the humble of abodes of the Berbers in the Atlas Mountains to the sonorous calls to prayer above the Jemma el-Fnaa of Marrakesh.

Admittedly, I didn’t experience all of Western Morocco, but what I did see left treasured memories. Here are the places I went in Western Morocco, all of which I’d wholeheartedly recommend.

The Telegraph describes Essaouira as an “enchanting, laid-back alternative to the frenetic melting-pot of Marrakesh”, to which I couldn’t agree more.

We stayed 2-nights in the Dar L’Oussia resort, arranged for us as part of Naturally Morocco’s tailored package. The hotel had a cool French colonial atmosphere, with a pool in the central courtyard, mezzanines arranged around this that led to the rooms.

We spent much of the first day exploring Essaouira, the historical medina and its 18th-century fortifications. Here, the narrow streets and souqs offer an authentic experience of Western Morocco, without the hassle you might get in larger cities.

But the highlight of our stay in the city was when we walked down the coast a little and found a man hiring out sea kayaks. We took one of these out towards the nearby Île de Mogador, also known as the Purple Isles and famously inhabited by falcons. We didn’t see any falcons, but we had a chance to get up close to the rugged islands and see the ruined structures that inhabit them. Essaouira is renowned for its winds and, although we got quite mild weather, we worried at times that we’d run ashore on the waves breaking against the rocks.

The next day, we headed out from Essaouira on a camel trek. I’d ridden horses before and I must say that camels proved even more painful and I felt like a penguin when I dismounted. We had a chance to explore the dunes on the far north side of Western Sahara, giving us an authentic taste of nomadic Morocco. We spent the evening with a family over drinks in a yurt. They stayed the night there while my sister and I camped in tents.

The Berbers and the Atlas Mountains

For me, this was the highlight of our trip through Western Morocco. A private driver picked us up from the campsite we’d stayed at the previous day and drove us over to Ouirgane National Park. The route took us into the Atlas Mountains, along mountain paths that we drove so fast around we were afraid of tumbling over the edge.

We eventually arrived at the Dar Tassa hotel, an isolated mountain guesthouse with stunning views of the surrounding mountains and a cosy feel, entirely different from the cooler vibe of the guesthouse in Essaouira.

After a relaxing night there, we embarked on a three-day trek through the hills of the Ouirgane National Park, at the foothills of Mount Toubkal, the highest mountain in North Africa. We couldn’t climb Toubkal, as it was snow-capped and our guides informed us it would be too slippery. Mules were on hand to lug our heavy backpacks on the road with us, which helped with the heat as we traversed the red sandy terrain.

Our group consisted of eight British travellers, all couples except my sister and myself. Several local Berber guides also accompanied us on the journey. The two I remember are Sharif, an incredibly introspective and spiritual character, and an eighty-year-old man called Mohammed who was the pride of his local village and had a powerful tenor voice. As we walked, he sang in a language quite different from the Arabic and French we’d heard in Essaouira.

I took my camera, but I soon learnt not to take photos of the locals as they’d duck away as soon as they saw the lens, particularly the children. Speaking of the children, in the side of my daypack, I carried some wet-wipes which soon disappeared once a group of three youngsters asked if they could have them. After I agreed, they took hold of the packet and tousled over them, alarmingly at the side of the precipitous mountain pass.

We stayed in the local Berber houses and camped out on their floors. They didn’t drink alcohol here, but intensely sugary mint tea which they proudly called “Berber Whiskey”. Every night, we would drink copious amounts of it, after a fruity meal of tagine stew with couscous. During the day, they served us Moroccan flatbread with tuna and onions. The food lasted for the journey. None of us complained that it was all the same.

One night we gate-crashed a Berber wedding, gazing in wonderment. Then, we talked as we looked down into the valley, sharing the stories of our travels and London lives and how they starkly contrasted to this incredibly peaceful place. Sharif showed us a long rope that led down from the house into the valley below. He took hold of it, gave it a shake, and a collection of hanging pots and pans clanged from the bottom of the valley.

“That,” Sharif said. “Is to scare off the wild boars.”

At the heart of Western Morocco is the Moroccan capital of Marrakesh. We stayed in Riad Tah Tah, a traditional Moroccan house (called a riad) with an outside terrace. There we could eat breakfast as we listened to the sounds of the city pass over the rooftops.

We spent some time wandering the narrow alleyways, that zig-zagged around, much like they would in an Andalusian city. We didn’t have as much time there as we would have liked, but we did have time to do some shopping. Marrakesh is a haven for those who collect minerals and precious stones, and we found a local store where we could haggle our hearts away.

Of course, a visit to Marrakesh isn’t complete without visiting the Jemma el-Fnaa. This central marketplace thrums with activity, serving all kinds of local dishes from lamb tagine to monkey brains. We took some time to explore this vast square during the evening. A mosque rises above the marketplace, from which a call to prayer resonates out.

Later, we visited the Patisserie de Princes, serving a tantalising selection of baklava and other desserts.

Getting to Western Morocco and Accommodation Once You Get There

Marrakesh is a convenient airport and a perfect hub for exploring Western Morocco. Regular and inexpensive flights run from London.

We visited in late October and found the weather balmy but not too hot, and perfectly manageable in the Atlas Mountains. Winters in Morocco can get quite chilly, particularly in the hills and especially if you want to climb Toubkal.

We stayed at Dar L’Oussia in Essaouira, Ouirgane Dar Tassa on the first night in the Atlas Mountains and Riad Tah Tah. I highly recommend all three establishments.

Thanks for reading my account of a trip to Western Morocco at Being a Nomad. Have you visited Morocco? If so, what kind of experiences did you have? We’d love to hear about your adventures. 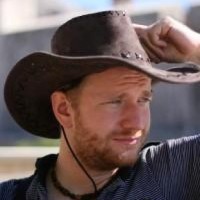